I discovered Instagram. Yes, I knew about it but didn’t want to add another site to while away the hours but after seeing my millennial sibling on there I decided to acquiesce. I’m glad I did. So much inspiration for a creative person. Also, got to love a filter or 2 when you can’t manage to grab a picture in focus and/or under nice lighting conditions.

I will post the dozen or so bits of sewing I’ve done since my last posts.

Has anyone noticed how neutral coloured our clothing and accessories have become. BORING. I get no pleasure from wearing grey. So with the arrival of spring I decided to spring clean (using up fabric counts right?) and create a colourful bag for myself.

I came across a free tutorial put up by the Mad Quilter at madquilter.blogspot.com.au called the Charm Square Jewel Bag. Thanks Madquilter!

The only difference is that I think I sewed up the sides differently. My bag doesn’t quite sit the same as the one in the tutorial. 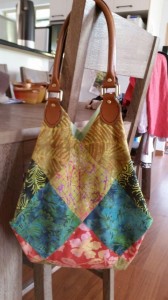 After watching the first episode of The Great British Sewing Bee Season 4, I was inspired to whip up a quick winter item for kids. After perusing my obscenely large pinterest board of sewing ideas I came across these leggings at http://toddah.net/. The tutorial is nicely laid out and easy to follow. Pattern is available for up to size 2. 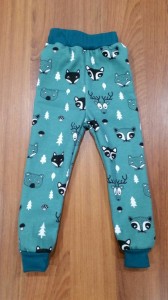 Made in size 2 with added contrasting waistband and cuffs. I didn’t manage to pattern match the fabric on this one. All in all I’m quite happy with this fun pair of what looks like skinny trackies (yeah, that was intentional…)

Yes, I haven’t posted my April BOM because well, it’s boomed out. I’m trying to work my way out of it. 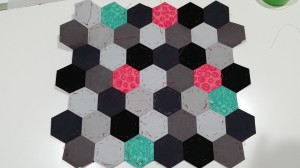 This months (ok I’m about a week out) quilt block is constructed using 1 1/4 inch hexagon english paper pieces. The hexagons (or other shapes and sizes) are available from most craft shops and online.

You cut out enough fabric to wrap a minimum of 6mm around the hexagon and tack the fabric down with a contrasting thread. You then join the fabric hexagons with a small whip stitch (mine averages at 16 stitches per inch – impressive yes?). Once tacked together you can remove the contrasting tacking stitches. I’ve left them in until I sew together the other 12 x 12 inch patches in to a quilt. 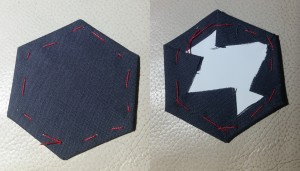 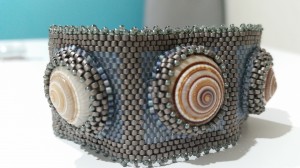 I bought these shells and really wanted to have a go at encasing them in a bead bezel. It worked so well I stitched up the cuff for them. It fits perfectly with an inbuilt clasp. It still amazes me the potential that seed beads have. If you have the imagination and basic skills you are only limited by your imagination. 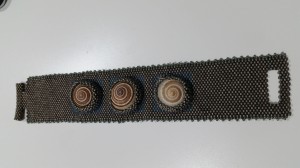 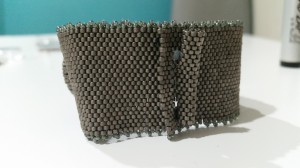 I forgot to post this earlier. Yes, I did manage to get this finished in time. I won’t be in a rush to make another anytime soon. 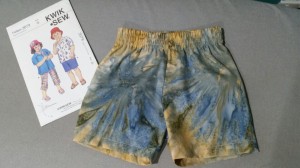 I whipped up a pair of funky hand dyed toddler shorts in size 2 using Kwik Sew 3079. The only real difference between this pattern and the previous shorts I sewed using pattern 3398 is the sizing. This pattern is for toddlers sizes 1 – 4, 3398 is for 4 – 10 year olds and has pockets. You could insert elastic in to the legs to make them in to bloomers.

Pattern took 2 fat quarters and 1.5 hours to make including copying of pattern to tracing paper. 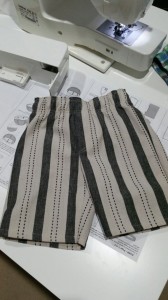 After watching an episode of The Great British Sewing Bee about the Make-do-and-mend period of WW2, I decided to have a go at sewing a pair of play shorts using 2 x tea towels. That’s right. Tea towels and it worked. The only down side is that you generally have to pattern match which I didn’t do on my first go.

Took 2 hrs from start to finish including copying the pattern. 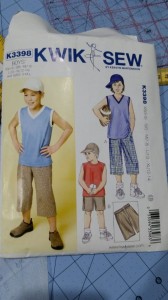 I had never sewn in a fly before. Turned out it wasn’t as tricky as I thought it would be. 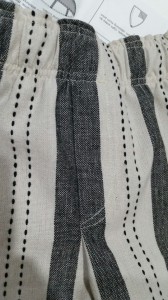 The blue shorts are store bought and I used them to recreate the same type of waist band. 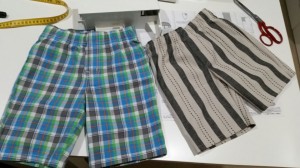 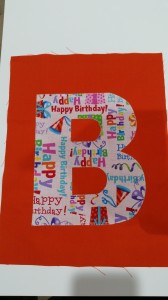